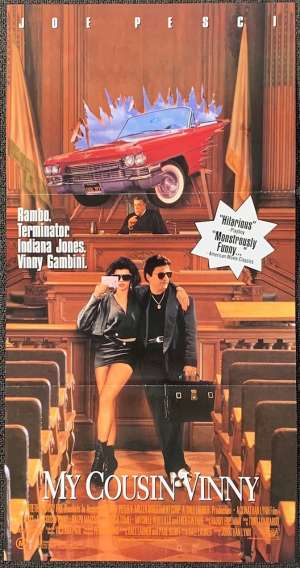 Daybill Poster. My Cousin Vinny is a 1992 American comedy film directed by Jonathan Lynn, from a screenplay by Dale Launer. The film stars Joe Pesci, Ralph Macchio, Marisa Tomei, Mitchell Whitfield, Lane Smith, Bruce McGill, and Fred Gwynne in his final film appearance. It was distributed by 20th Century Fox and released on March 13, 1992. The film deals with two young New Yorkers traveling through rural Alabama who are arrested and put on trial for a murder they did not commit and the comical attempts of a cousin, Vinny Gambini, a lawyer who had only recently passed the bar exam after several unsuccessful attempts, to defend them. Much of the humour comes from the fish-out-of-water interaction between the brash Italian-American New Yorkers (Vinny and his fiancée, Mona Lisa Vito) and the more reserved Southern townspeople. My Cousin Vinny was a critical and financial success, with Pesci, Gwynne, and Tomei all praised for their performances. Tomei won the Academy Award for Best Supporting Actress. Attorneys have also lauded the film for its accurate depiction of court procedure and trial strategy.