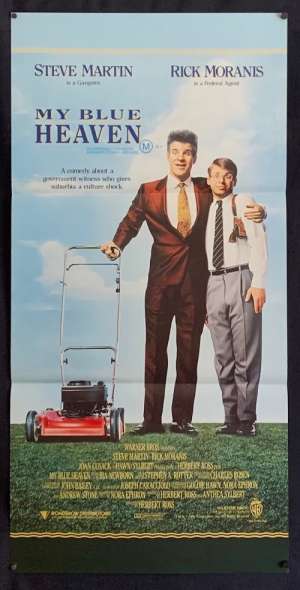 Daybill Poster.My Blue Heaven is a 1990 American crime comedy film directed by Herbert Ross, written by Nora Ephron, and starring Steve Martin, Rick Moranis, and Joan Cusack. Originally, Steve Martin was cast to play Coopersmith, with Arnold Schwarzenegger playing the role of Antonelli. However, Schwarzenegger was soon thereafter offered the role of Det. John Kimble in Kindergarten Cop and left the production. Failing to find another suitable "Vinnie" for Martin's Coopersmith (Danny DeVito turned down the role), Martin offered to take on the part of Vinnie himself. Producers agreed, and then cast Rick Moranis as Coopersmith, who had originally been considered for the role, but was unavailable until then. This is the third film in which Martin and Moranis starred together. It has been noted for its relationship to Goodfellas, which was released one month later. Both films are based on the life of Henry Hill, although the character is renamed "Vincent 'Vinnie' Antonelli" in My Blue Heaven. Goodfellas was based on the book Wiseguy by Nicholas Pileggi, while the screenplay for My Blue Heaven was written by Pileggi's wife Nora Ephron, and much of the research for both works was done in the same sessions with Hill. The film's title comes from the famous song performed by Fats Domino,which appears on the soundtrack.