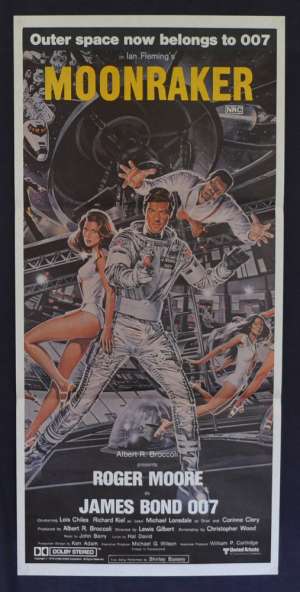 Daybill Poster with borders and excellent artwork by Daniel Goozee.Moonraker (1979) is the eleventh spy film in the James Bond series, and the fourth to star Roger Moore as the fictional MI6 agent James Bond. The third and final film in the series to be directed by Lewis Gilbert, it co-stars Lois Chiles, Michael Lonsdale, Corinne Cléry, and Richard Kiel. Moonraker was noted for its high production cost of $34 million, spending almost twice as much money as predecessor The Spy Who Loved Me, and it received very mixed reviews. However, the film's visuals were praised, with Derek Meddings being nominated for the Academy Award for Best Visual Effects, and the film eventually became the highest grossing film of the series with $210,300,000 worldwide,a record that stood until 1995's GoldenEye.