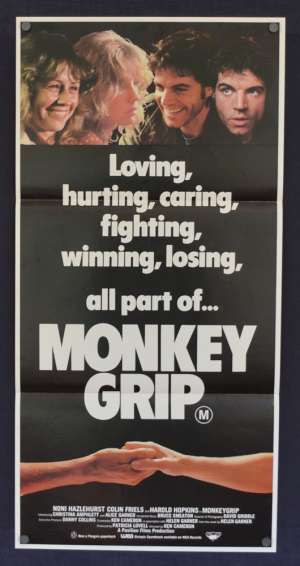 Country of origin poster. Monkey Grip is a 1982 Australian drama film directed by Ken Cameron. It is based on the novel, also titled Monkey Grip, by Helen Garner.The film was produced by Patricia Lovell and stars Noni Hazelhurst and Colin Friels. Ken Cameron tried to get up a film version of Helen Garner's novel in early 1979 but could not raise the budget of $553,000.Shooting was postponed until Patricia Lovell managed to get the money under 10BA tax regulations. However, by then costs had risen so much the film had to be made for $1 million. The film was shot in early 1981.The story is set in Melbourne but only one week of filming took place there, with Sydney standing in for the location.