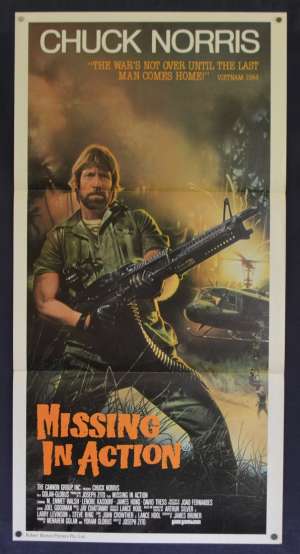 Poster art by Stan Watts. Missing in Action is a 1984 American action film directed by Joseph Zito and starring Chuck Norris. It is set in the context of the Vietnam War POW/MIA issue. Colonel Braddock, who escaped a Vietnamese prisoner of war camp 10 years earlier, returns to Vietnam to find American soldiers listed as missing in action during the Vietnam War. The film was followed by a prequel, Missing in Action 2: The Beginning (1985), and a sequel, Braddock: Missing in Action III (1988). The film was a commercial success and has become one of Chuck Norris's most popular films. It was also Chuck Norris's first film with The Cannon Group and he became their most prominent star of the 1980’s. The concept for the film originated from a story treatment, written by James Cameron (Terminator) in 1983, for the film Rambo: First Blood Part II that was floating around Hollywood at the time. This explains the similar plot lines between Rambo 2 and MIA. Representatives from Cannon Group claimed to have been "inspired" by Cameron's script and subsequently produced and released the first two Missing in Action films two months before the release of Rambo, in order to avoid copyright violation lawsuits. Missing in Action 2 was filmed back to back with Missing in Action.