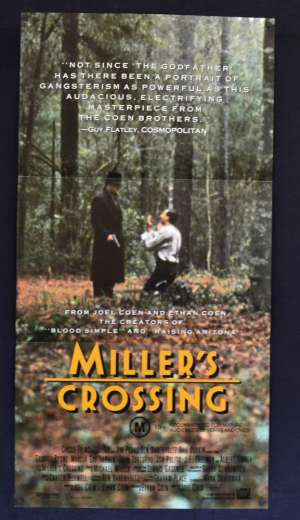 Miller's Crossing is a 1990 American neo-noir gangster film, with elements of black comedy, written, directed and produced by the Coen brothers, and starring Gabriel Byrne, Marcia Gay Harden, John Turturro, Jon Polito, J. E. Freeman, and Albert Finney. The plot concerns a power struggle between two rival gangs and how the protagonist, Tom Reagan (Byrne), plays both sides off against each other.In 2005, TIME chose Miller's Crossing as one of the 100 greatest films made since the inception of the periodical. TIME critic Richard Corliss called it a "noir with a touch so light, the film seems to float on the breeze like the frisbee of a fedora sailing through the forest."