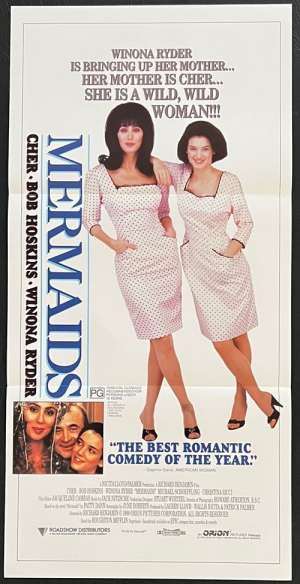 Daybill Poster.Mermaids is a 1990 American dramedy film directed by Richard Benjamin, and starring Cher, Bob Hoskins, Winona Ryder, Michael Schoeffling, and Christina Ricci in her film debut. Set in the early 1960s, its plot follows a neurotic teenage girl who moves with her wayward mother and young sister to a small town in Massachusetts. It is based on the 1986 novel of the same name by Patty Dann. Swedish director Lasse Hallström was initially attached to direct Mermaids as his American feature debut, but he left the project to direct Once Around (1991). Frank Oz was subsequently hired as a replacement, but also abandoned the project after clashing with actresses Cher and Winona Ryder. Filming of Mermaids took place in various locations in Massachusetts in the fall of 1989.Released in December 1990, Mermaids was met with critical acclaim, particularly for the performance of Ryder, who received a Golden Globe Award nomination and a National Board of Review Award. Ricci also won a Young Artist Award for her performance.