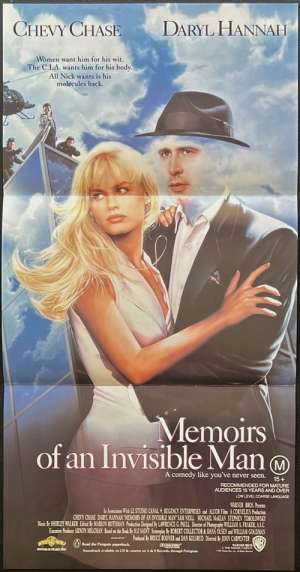 Daybill Poster.Memoirs of an Invisible Man is a 1992 American sci-fi black comedy directed by John Carpenter and starring Chevy Chase, Daryl Hannah, Sam Neill, Michael McKean and Stephen Tobolowsky. The film is loosely based on Memoirs of an Invisible Man, a 1987 novel by H.F. Saint. This is one of the few John Carpenter films not scored by the director, with Shirley Walker composing the music instead. Unlike prior collaborators Ennio Morricone on The Thing and Jack Nitzsche on Starman, Walker would re-team with Carpenter – the two co-scored the subsequent Escape From L.A.. The film debuted at No. 2 upon release in the USA. Critics felt the film boasted  an intriguing cast and the special effects were ground breaking.