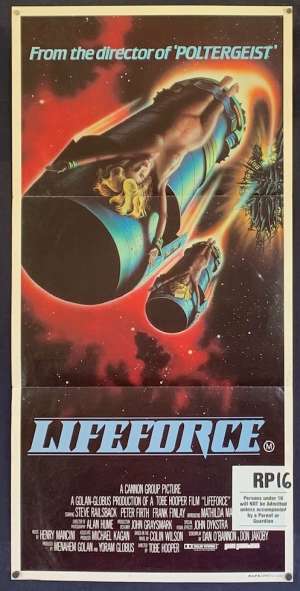 Australian Daybill movie poster used in New Zealand with sort after artwork.Lifeforce is a 1985 British science fiction horror film directed by Tobe Hooper, written by Dan O'Bannon and Don Jakoby, and starring Steve Railsback, Peter Firth, Frank Finlay, Mathilda May, and Patrick Stewart. Based on Colin Wilson's 1976 novel The Space Vampires, the film portrays the events that unfold after a trio of humanoids in a state of suspended animation are brought to Earth after being discovered in the hold of an alien space ship by the crew of a European space shuttle. The film currently enjoys a cult following. Lifeforce was the first film of Tobe Hooper's three-picture deal with Cannon Films, following Poltergeist in 1982. It has been suggested that Lifeforce is largely a remake of Hammer Film Productions's Quatermass and the Pit. In February 1984 Billy Idol said he had been offered a lead role as a vampire by Hooper, who had directed the video of "Dancing with Myself", but turned it down due to touring commitments.