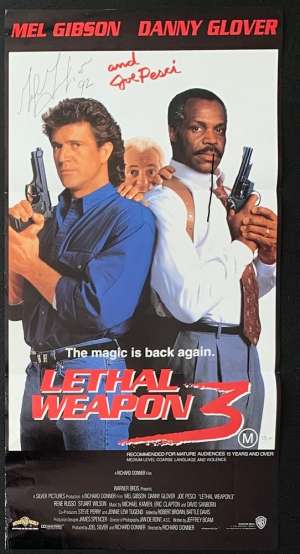 Lethal Weapon 3 is a 1992 American buddy cop action comedy film directed and produced by Richard Donner, and starring Mel Gibson, Danny Glover, Joe Pesci, Rene Russo and Stuart Wilson.Lethal Weapon 3 was a box office success, grossing over $320 million worldwide. It was the fifth highest-grossing film of 1992 and the highest grossing film in the Lethal Weapon series. Note: The Autograph's you see on the original cinema poster are only prints and not original. this cinema poster was issued at the time of release with these printed autographs.