The Legend Of The Lone Ranger 1981 Daybill movie poster Western 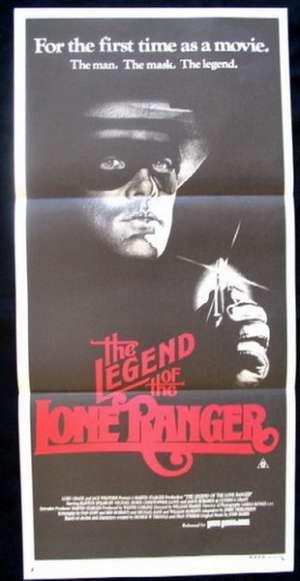 Original Australian Daybill - artwork by Charles deMar. The Legend of the Lone Ranger, the 1981 William A. Fraker masked hero cowboy western ("The untold story of the man behind the mask and the legend behind the man."; "The loyal friend that he trusted. The woman that fate denied him. The great silver stallion he rode. And his consuming love of justice."; written by Ivan Goff & William Roberts; based on characters created by George W. Trendle) starring Klinton Spilsbury (in the title role as The Lone Ranger, and the only role of his extremely short career!), Michael Horse (as Tonto), Christopher Lloyd, Jason Robards ("as President Ulysses S. Grant"), Matt Clark, and Juanin Clay.