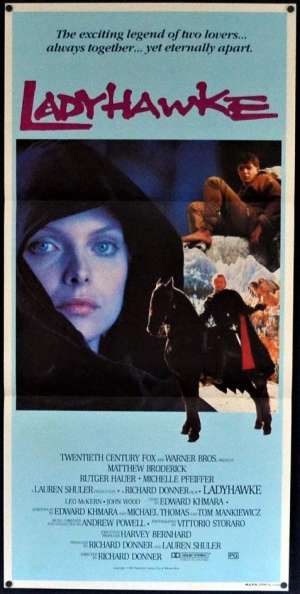 Ladyhawke is a 1985 fantasy adventure film directed by Richard Donner, starring Matthew Broderick, Rutger Hauer, and Michelle Pfeiffer. Ladyhawke was nominated for two Academy Awards, in the categories of Best Sound Editing (Robert G. Henderson) and Best Sound Mixing. It won a Saturn Award for Best Fantasy Film, and was nominated in the categories of Best Actress (Michelle Pfeiffer) and Best Music (Andrew Powell). Originally, Kurt Russell was cast as the male lead alongside Michelle Pfeiffer. However Russell pulled out during rehearsals and Rutger Hauer was chosen to replace him. The role of the pickpocket was offered to Sean Penn and then Dustin Hoffman, before Donner decided to go with Matthew Broderick.