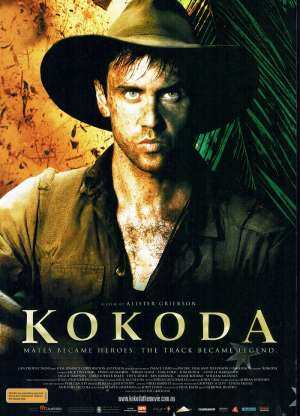 Original cinema movie poster flyer. Kokoda (also known as Kokoda - 39th Battalion) is a 2006 Australian film directed by Alister Grierson and is based on the experiences of Australian troops fighting Japanese forces during the 1942 Kokoda Track campaign. The movie was inspired by the true story of a forward patrol led by Lieutenant Sword that found itself cut off from supply at the beginning of the battle for Isurava. After many frightening days making their way back to Isurava with no food, carrying the wounded and suffering from the effects of tropical diseases, they emerged from the jungle near Alola. Upon hearing that the 39th Battalion was about to be overrun, they joined a party of severely wounded men and made their way back to the battle. The film received 6 nominations. Two 2006 AFI nominations for best costume design and best visual effects, one nomination from the Film Critics Circle of Australia for best cinematography and three from the IF Awards for best cinematography, best editing and best production design.