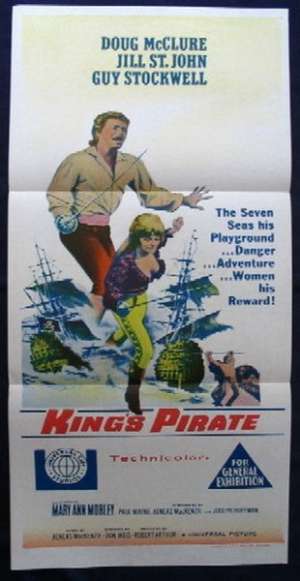 King's Pirate Poster Doug Mclure Daybill| Lt. Brian Fleming volunteers to be flogged for a contrived offense and then discharged from the British Navy so he can infiltrate the pirate stronghold of Diego Suarez using his whip-scarred back as proof of his disgrace. While gathering inside information about this stronghold's fortifications, he falls in love with Jessica Stephens who's also courted by the pirate captain, John Avery. At the same time he must fend off the advances of a love-struck Moghul princess who's recently been taken captive. Events reach a climax in a shipboard battle when Fleming's true motivations are revealed.