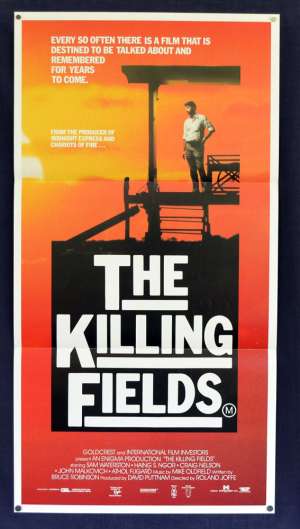 Original Australian Daybill movie poster The Killing Fields. The Killing Fields is a 1984 British biographical drama film about the Khmer Rouge regime in Cambodia, which is based on the experiences of two journalists: Cambodian Dith Pran and American Sydney Schanberg. It was directed by Roland Joffé and produced by David Puttnam for his company Goldcrest Films. Sam Waterston stars as Schanberg, Haing S. Ngor as Pran, Julian Sands as Jon Swain, and John Malkovich as Al Rockoff. The adaptation for the screen was written by Bruce Robinson; the musical score was written by Mike Oldfield and orchestrated by David Bedford.The film was a success at the box office as well as being an instant hit with critics. At the 57th Academy Awards it received eight Oscar nominations; including Best Picture; it won three, most notably Best Supporting Actor for Haing S. Ngor, who had had no previous acting experience. In 1999 the British Film Institute voted The Killing Fields the 100th greatest British film of all time.