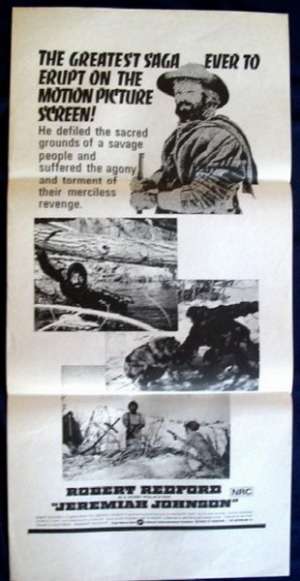 Poster art by Ted CoConis. Jeremiah Johnson is a 1972 American western film directed by Sydney Pollack and starring Robert Redford as the title character and Will Geer as "Bear Claw" Chris Lapp. The role of Jeremiah Johnson was originally intended for Lee Marvin and then Clint Eastwood, with Sam Peckinpah to direct. However, Peckinpah and Eastwood did not get along, so Peckinpah left and Eastwood decided to make Dirty Harry instead. Warner Bros. then stepped in and set up Milius' screenplay for Robert Redford. Without a director, Redford talked Sydney Pollack into it; the two were looking for another film to collaborate on after This Property Is Condemned. The film is said to have been based partly on the life of the legendary mountain man John Jeremiah Johnson, recounted in Raymond Thorp and Robert Bunker's book Crow Killer: The Saga of Liver-Eating Johnson and Vardis Fisher's Mountain Man. The film was shot at various locations in Redford's adopted home state of Utah. Struggling with weather and the budget, rarely were the crew able to shoot any second takes. Jeremiah Johnson had its world-wide premiere on May 7th at the 1972 Cannes Film Festival, where it was screened in competition. It was the first western film to ever be accepted in the festival. The film was a world- wide critical and commercial success.