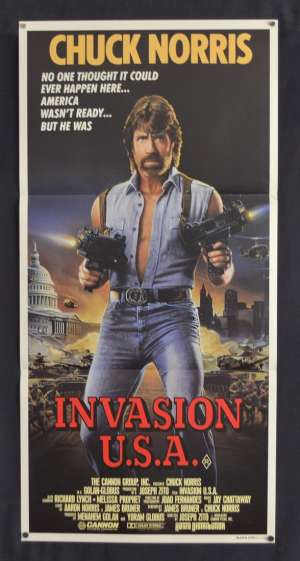 Poster art by Stan Watts. Invasion U.S.A. is a 1985 American action film made by Cannon Films starring Chuck Norris. It was directed by Joseph Zito. The film was the first in a six-film contract Chuck Norris signed with Cannon Films following the success of the Missing in Action movies. It involves the star fighting off a force of Cuban-led guerrillas. Both Chuck Norris and his brother, Aaron, were involved in the writing. It was made in the Greater Atlanta area of Georgia, and Fort Pierce, Florida. Miami landmarks, such as Dadeland Mall and Miracle Mile, can also be seen in the film. The film debuted at number one at the box office with $6.9 million. Like most of the studio Cannon's films, it has gone onto develop a large cult following. The 1986 film Avenging Force is a sequel starring Michael Dudikoff who replaced Chuck Norris in the lead role after Norris turned it down. This film is unrelated to the 1952 film of the same name.