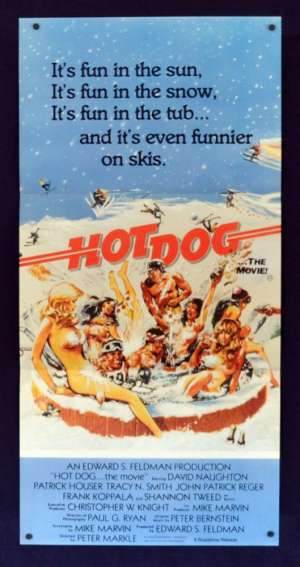 Daybill Poster.Hot Dog…The Movie is a comedy ski film released in January 1984. The film went on to gross over $17 million and became one of the iconic comedies of the 1980s. The film stars Patrick Houser as a young and ambitious freestyle skier who is determined to prove himself in a freestyle skiing competition. He teams up with a pack of fun-loving incorrigibles who called themselves the "Rat Pack" (whose leader, played by David Naughton), picks up an Austrian nemesis John Patrick Reger and enters a love triangle with a pair of blondes, Tracy N. Smith and the more mature Shannon Tweed (1982 Playboy Playmate of the Year) in just her second major film role.