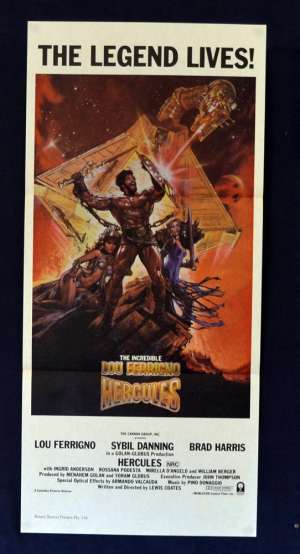 Original Australian Daybill movie poster with Drew Struzan artwork. Hercules is a 1983 Italian adventure film written and directed by Luigi Cozzi (credited as Lewis Coates) and starring Lou Ferrigno. The film is based on Greek mythology and follows the exploits of Hercules.Part of the adventure finds Hercules battling giant robots brought to life by stop motion animation. The musical score was provided by Pino Donaggio. The film has become something of a cult favorite and a sequel called The Adventures of Hercules (also starring Ferrigno and written and directed by Cozzi) was released in 1985.