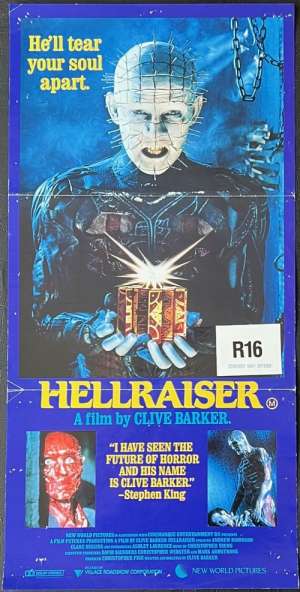 Very rare original Australian Daybill movie poster Hellraiser 1987. Hellraiser is a 1987 British horror film written and directed by Clive Barker, based on his own novella The Hellbound Heart. Starring Sean Chapman and Andrew Robinson the film spawned a series of sequels. Barker originally wanted the electronic music group Coil to perform the music for the film, but later had the group's music changed by Christopher Young. Hellraiser had its first public showing at the Prince Charles Cinema on 10 September 1987. Melody Maker reviewed it as the greatest horror film made in Britain at the time.