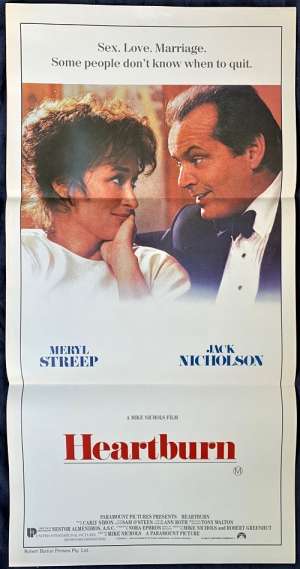 Daybill Poster. Heartburn is a 1986 American romantic comedy-drama film directed and produced by Mike Nichols, starring Meryl Streep, Jack Nicholson, Stockard Channing and Jeff Daniels. Kevin Spacey makes his film debut in a minor role as a subway thief. The film was shot on location in Manhattan, Washington, D.C. and Alexandria, Virginia. Jack Nicholson replaced Mandy Patinkin after a day of shooting. Nora Ephron's screenplay is based on her 1983 autobiographical novel of the same name and was inspired by her tempestuous second marriage to Carl Bernstein and his affair with Margaret Jay, the daughter of former British Prime Minister James Callaghan. The film's music was composed by Carly Simon. Her songs, "Coming Around Again" and "Itsy Bitsy Spider", are included in the 1987 Grammy nominated album Coming Around Again. The actual song "Coming Around Again" became one of her Billboard hits, reaching #18 on the Hot 100 and #5 on the Adult Contemporary chart. The film was released in the United States on July 25, 1986 meeting with both critical and commercial success.