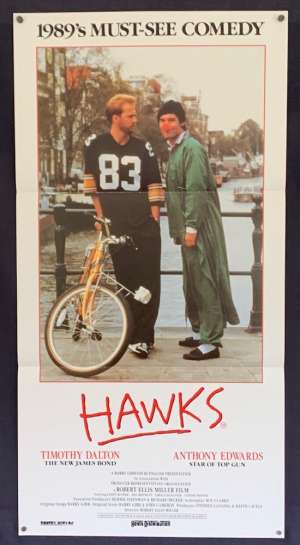 Rare Daybill Poster art.Hawks is a 1988 British comedy film about two terminally ill patients, an English lawyer named Bancroft (Timothy Dalton) and a young Gridiron football player (Anthony Edwards), who decide to sneak out of their hospital rooms and live life to its fullest for whatever time they have left. Their goal is to reach a famous brothel in Amsterdam. Along the way, they encounter various characters including a pair of misfit British women played by Camille Coduri and Janet McTeer. It was filmed on location in London's Charing Cross Hospital and in the Netherlands. The film was directed by Robert Ellis Miller and based on a short story written by Barry Gibb of the Bee Gees and David English, and the screenplay was written by Roy Clarke. The musical score was composed by Gibb. Four of the cast of Hawks (1988) have appeared in the James Bond film franchise. Jill Bennett played Jacoba Brink in For Your Eyes Only (1981), Geoffrey Palmer portrayed Admiral Roebuck in Tomorrow Never Dies (1997), Timothy Dalton was James Bond in The Living Daylights (1987) and Licence to Kill (1989), and Julie T. Wallace played Rosika Miklos in The Living Daylights (1987).The film is rated R16 in New Zealand for nudity, sexual references and offensive language.