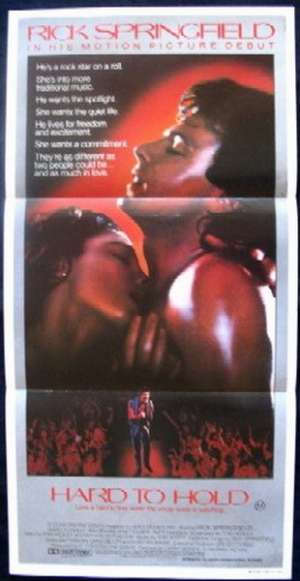 Daybill Poster.Hard to Hold is a 1984 musical drama film directed by Larry Peerce. It was meant as a starring vehicle for Australian Rick Springfield, who had a solid television acting resume and a blossoming rock-pop career. He had yet to break out in feature films. Director Larry Peerce said Rick is a marvellous, talented, well-trained young man with a wonderful sense of comedy - and sexy as hell.... Anyone who can make it through the soaps can make it through anything. Then, too, he has that thing that happens to people who've been up and down a few times." Peerce added that Springfield "not only appeals to youth, but to mature women, too - and he's also one of those rare handsome, sexy men who doesn't put other men off." In addition to Springfield, Janet Eilber and Patti Hansen also star. The film features many Springfield songs which are included on the soundtrack to the film. The film had to be edited so it would be rated PG rather than R due to the nude love scenes. Springfield followed making the movie with a ‘Hard To Hold’ tour.