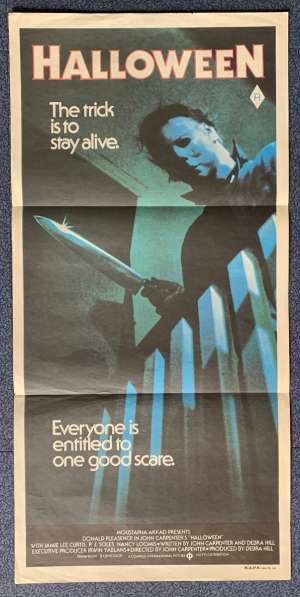 Daybill Movie Poster.Halloween is a 1978 American slasher film directed and scored by John Carpenter, co-written with producer Debra Hill, and starring Donald Pleasence and Jamie Lee Curtis in her film debut. The plot tells about a mental patient who was committed to a sanatorium for murdering his teenage sister on Halloween night when he was six years old.Fifteen years later, he escapes and returns to his hometown, where he stalks a female babysitter and her friends, while under pursuit by his psychiatrist. Filming took place in Southern California in May 1978, before premiering in October, where it grossed $70 million, becoming one of the most profitable independent films.Primarily praised for Carpenter's direction and score and Curtis's performance, many credit the film as the first in a long line of slasher films inspired by Alfred Hitchcock's Psycho (1960) and Bob Clark's Black Christmas (1974).The low budget limited the number of big names that Carpenter could attract, and most of the actors received little compensation for their roles. Pleasence was paid the highest amount at $20,000, Curtis received $8,000, and Nick Castle (Michael Myers) earned $25 a day. The role of Dr. Loomis was originally intended for Peter Cushing, who had recently appeared in Star Wars(1977)Cushing's agent rejected Carpenter's offer due to the low salary.Christopher Lee was approached for the role;he too turned it down,the actor later told Carpenter & Hill that declining the role was the biggest mistake he made in his career.