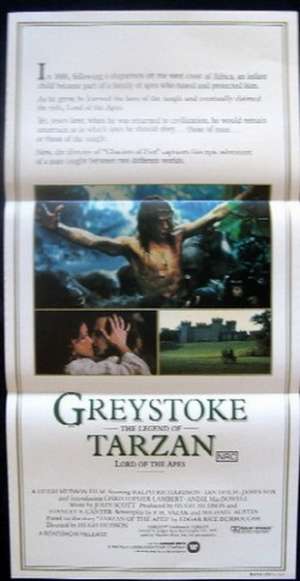 Daybill Poster.Greystoke: The Legend of Tarzan is a 1984 adventure film directed by Hugh Hudson (Chariots Of Fire) based on Edgar Rice Burroughs' novel Tarzan of the Apes (1912). Christopher Lambert stars as Tarzan (though the name Tarzan is never used in the film's dialogue) and Andie MacDowell as Jane; the cast also includes Ralph Richardson (in his final role), Ian Holm, James Fox, Cheryl Campbell, and Ian Charleson. The Director tested various actors as Tarzan: Julian Sands (The Killing Fields), Viggo Mortensen (Lord Of the Rings later fame) and Christopher Lambert. Hudson said it came down to Lambert and Mortensen. "I just felt that Christopher was the right person. He had this strange quality — somehow, because he was myopic, when he took his glasses off, he couldn’t really see properly so he would seem to look through you into the distance. "Andie MacDowell made her film debut as Jane. Greystoke went on to receive three Oscar nominations at the 57th Academy Awards ceremony for Best Actor in a Supporting Role for Richardson, Best Writing, Screenplay Based on Material from Another Medium, and Best Makeup. It became the first-ever Tarzan feature film to be nominated for an Academy Award.