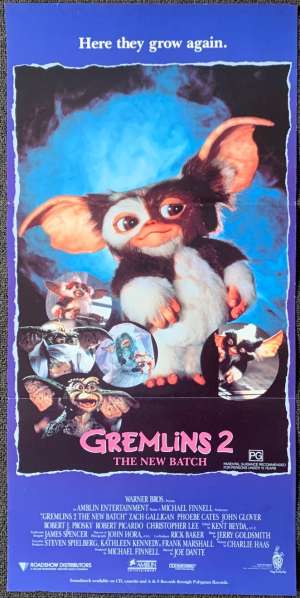 Daybill Poster. Gremlins 2: The New Batch is a 1990 American comedy horror film, and the sequel to Gremlins (1984). It was directed by Joe Dante and written by Charles S. Haas, with creature designs by Rick Baker. It stars Zach Galligan, Phoebe Cates, John Glover, Robert Prosky, Haviland Morris, Dick Miller, Jackie Joseph, Robert Picardo and Christopher Lee; additionally, the film features Tony Randall and Frank Welker providing the voices for two gremlins. There are a number of parodies of other films and stories, most notably Gremlins itself, as well as the Rambo films, The Wizard of Oz, Marathon Man and The Phantom of the Opera.