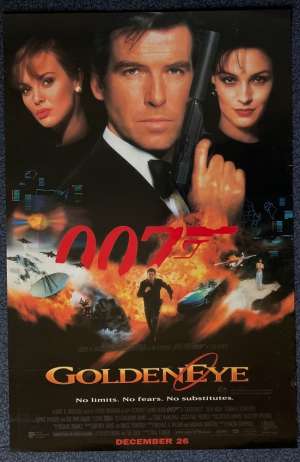 Daybill Poster.GoldenEye is a 1995 spy film. It is the seventeenth in the James Bond series produced by Eon Productions, and the first to star Pierce Brosnan as the fictional MI6 officer James Bond. It was directed by Martin Campbell and is the first in the series not to utilise any story elements from the works of novelist Ian Fleming. In the film, Bond fights to prevent an ex-MI6 agent, gone rogue, from using a satellite weapon against London to cause a global financial meltdown. The film was released after a six-year hiatus in the series caused by legal disputes, during which Timothy Dalton resigned from the role of James Bond and was replaced by Pierce Brosnan. M was also recast, with actress Judi Dench becoming the first woman to portray the character, replacing Robert Brown. The role of Miss Moneypenny was also recast, with Caroline Bliss being replaced by Samantha Bond; Desmond Llewelyn was the only actor to reprise his role, as Q. The film accumulated a worldwide gross of US$350.7 million and received positive reviews. It also received award nominations for "Best Achievement in Special Effects" and "Best Sound" from the British Academy of Film and Television Arts. The name "GoldenEye" pays homage to James Bond's creator, Ian Fleming. While working for British Naval Intelligence as a lieutenant commander, Fleming liaised with the Naval Intelligence Division to monitor developments in Spain after the Spanish Civil War in an operation codenamed Operation Goldeneye. Fleming used the name of this operation for his estate in Oracabessa, Jamaica.