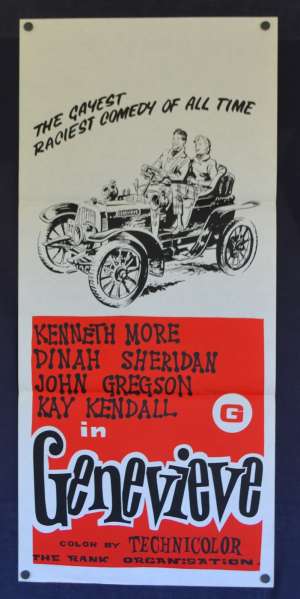 Genevieve is a 1953 British comedy film produced and directed by Henry Cornelius and written by William Rose. It stars John Gregson, Dinah Sheridan, Kenneth More and Kay Kendall as two couples comically involved in a veteran automobile rally.  The original choices for the male leads were Guy Middleton and Dirk Bogarde; they turned the film down, and their roles were given to Kenneth More and John Gregson respectively. Dinah Sheridan says that the studio wanted Claire Bloom to play her part. Genevieve was the second-most popular at the British box office in 1953. Genevieve was nominated for two Academy Awards: Best Original Screenplay (William Rose) and Best Music Score of a Dramatic or Comedy Picture. Genevieve won the BAFTA Award for Best British Film and was nominated for Best British Actor (Kenneth More) and Best Film from any Source. It won a Golden Globe for Best Foreign Film and National Board of Review award for Top Foreign Film.