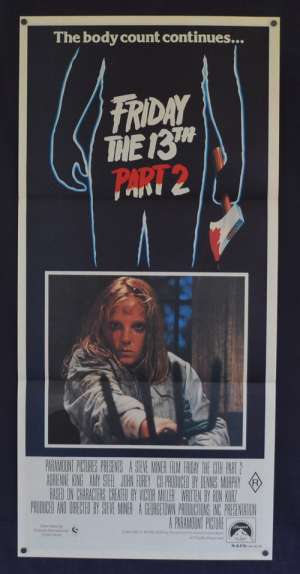 Rare Mint condition Original Australian Daybill movie poster. Friday the 13th Part 2 is a 1981 American slasher horror film directed by Steve Miner. It is a direct sequel to Friday the 13th, picking up five years after that film's conclusion, where a new murderer stalks and begins murdering the camp counsellors at a nearby training camp in Crystal Lake. The film marks the first time Jason Voorhees is the antagonist (his mother was the killer in the previous film).Originally, Friday the 13th Part 2 was not intended to be a direct sequel to the 1980 original but rather part of an anthology series of films based on the Friday the 13th superstition, but after the popularity of the original film's surprise ending to feature Jason Voorhees attacking the heroine, the filmmakers decided to bring back Jason and the mythology surrounding Camp Crystal Lake, a trend which would be repeated for the rest of the series.