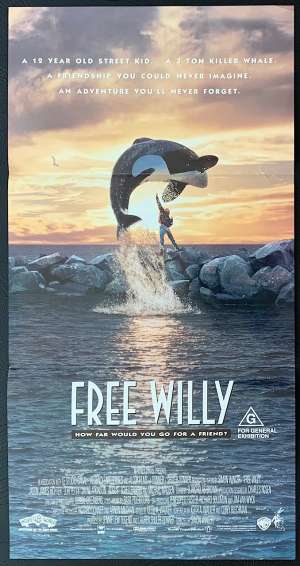 Daybill Poster. Free Willy is a 1993 American family drama film directed by Simon Wincer (The Lighthorsemen). The film stars Jason James Richter in his film debut, Lori Petty (Point Break), Jayne Atkinson, August Schellenberg and Michael Madsen (Reservoir Dogs) with the eponymous character, Willy, played by Keiko. The story is about an orphan boy who was ordered to clean up graffiti at an ailing amusement park as probation for vandalizing the observation area, and it was there that he befriended a captive orca until a dark secret revealed that the park's greedy owner plans to kill the whale for money.Shot between May and August 1992 and released on July 16, 1993, the film received positive attention from critics and was a commercial success, grossing $153.6 million from a $20 million budget.It grew into a small franchise, including a television series, two sequels and a direct-to-video reboot. It also inspired the rehabilitation and release of Keiko.