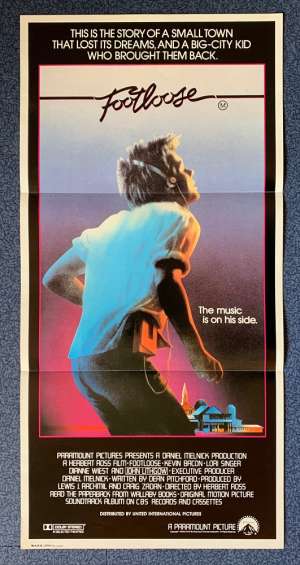 Daybill Poster.Footloose is a 1984 American musical drama film directed by Herbert Ross. It tells the story of Ren McCormack (Kevin Bacon), an upbeat Chicago teen who moves to a small town in which, as a result of the efforts of a local minister (John Lithgow), dancing and rock music have been banned. The film is loosely based on actual events that took place in the small, rural, and religious community of Elmore City, Oklahoma. Tom Cruise and Rob Lowe were both slated to play the lead but it eventually went to Bacon. Footloose grossed $80,035,403 just within the USA and went onto bigger sales worldwide.