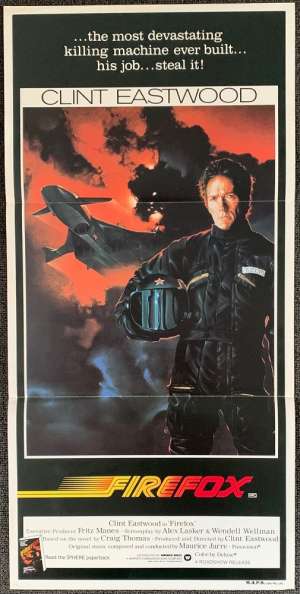 Daybill Poster Firefox is a 1982 American DeLuxe Color techno-thriller film produced, directed by and starring Clint Eastwood in Panavision. It is based upon the 1977 novel of the same name by Craig Thomas.Though the film was set in Russia, authentic filming locations were not possible due to the Cold War, forcing Eastwood's and Fritz Manes's Malpaso Company to rely on Vienna and other locations in Austria to double for many of the Eurasian story locations. The film was shot on a $21 million budget, the largest production budget ever for Malpaso. Of that amount, over $20 million was spent on special effects. It received mixed reviews but one reviewer said it is "A slick, muscular thriller that combines espionage with science fiction. The movie works like a well-crafted machine." Great poster art by Charles DeMar.