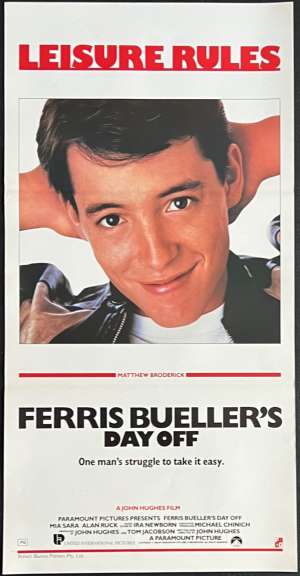 Daybill Poster in rarely found very fine condition.Ferris Bueller's Day Off is a 1986 American teen comedy film written, co-produced, and directed by John Hughes, and co-produced by Tom Jacobson. The film stars Matthew Broderick as Ferris Bueller, a high-school slacker who spends a day off from school, with Mia Sara, Alan Ruck, Jennifer Grey and Charlie Sheen. Anthony Michael Hall, who had previously worked with Hughes on three films, was originally offered the Ferris role but turned it down. Other actors who were considered for the role included Jim Carrey, John Cusack, Tom Cruise and Michael J. Fox. Hughes wrote the screenplay in less than a week. Released by Paramount Pictures on June 11, 1986, the film became one of the top-grossing films of the year, receiving $70.1 million over a $5.8 million budget, and was enthusiastically acclaimed by critics and audiences alike. Broderick was nominated for a Golden Globe Award in 1986 for Best Actor – Motion Picture Musical or Comedy.Entering into pop culture it has a significant cult following.