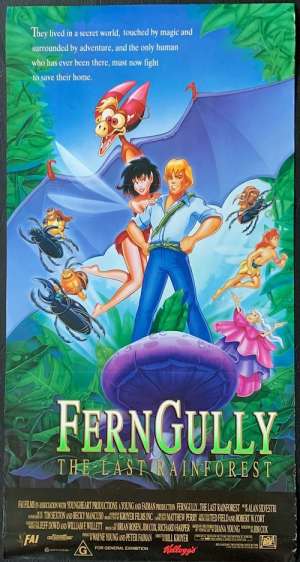 Daybill Poster. FernGully: The Last Rainforest is a 1992 animated musical fantasy film, directed by Bill Kroyer and scripted by Jim Cox. Adapted from the book of the same name by Diana Young, the film is an Australian and American venture produced by Kroyer Films, Inc., Youngheart Productions, FAI Films and 20th Century Fox. The film stars the voices of Tim Curry, Samantha Mathis, Christian Slater, Jonathan Ward, Robin Williams, and Grace Zabriskie. FernGully is set in an Australian rainforest inhabited by fairies including Crysta, who accidentally shrinks a young logger named Zak to the size of a fairy. Together, they rally the fairies and the animals of the rainforest to protect their home from the loggers and Hexxus, a malevolent pollution entity. Wayne Young, the film's producer, said the film was "blatantly environmental" though tried to avoid "preaching".The film was released to mainly positive reviews and was also generally considered a moderate financial success at the box office.