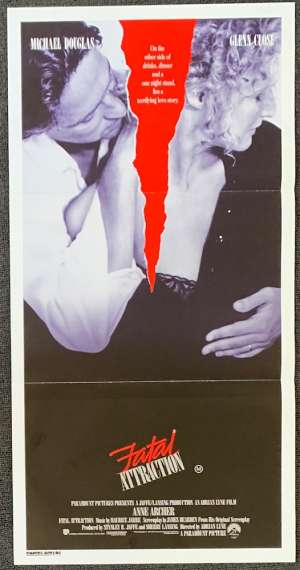 Daybill Poster.Fatal Attraction is a 1987 American psychological thriller film directed by Adrian Lyne and written by James Dearden. It is based on Dearden's 1980 short film Diversion. Featuring a cast of Michael Douglas, Glenn Close, Anne Archer, and Ellen Hamilton Latzen, the film centers on a married man who has a weekend affair with a woman who refuses to allow it to end and becomes obsessed with him. The film was a massive box office hit, finishing as the second highest-grossing film of 1987 in the United States and the highest-grossing film of the year worldwide. Critics were enthusiastic about the film, and it received six Academy Award nominations, including Best Picture, Best Actress for Close, and Best Supporting Actress for Archer.