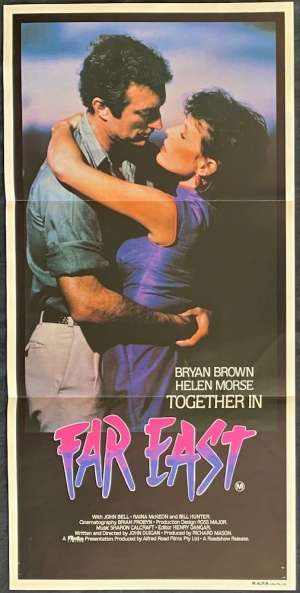 Daybill Poster.Far East is a 1982 Australian drama film directed by John Duigan and starring Bryan Brown, Helen Morse and John Bell. Far East has many similarities to the 1942 classic Casablanca.John Bell was nominated at the 1982 AFI Awards in the Best Actor in a Supporting Role category.The storyline was as follows: When journalist Peter Reeves and his wife Jo visit the 'The Koala Klub' run by Australian Morgan Keefe the past catches up with them. Twenty years earlier, Jo and Morgan were lovers in Saigon and although time has passed, it is obvious the flame could be rekindled.But when Peter is captured by secret Government troops, tortured and faced with certain death, Morgan is the only one who can rescue him.A tough story of human emotions stretched to the limit by war, love and mystery.