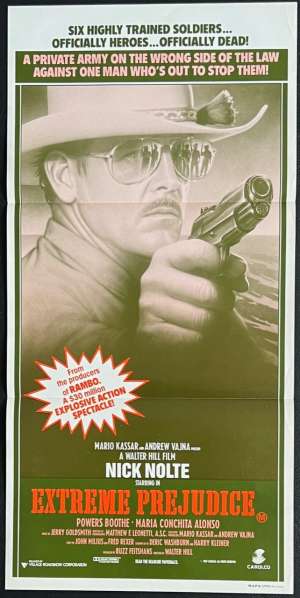 Daybill Poster.Extreme Prejudice is a 1987 American neo-western action film starring Nick Nolte and Powers Boothe, with a supporting cast including Michael Ironside, María Conchita Alonso, Rip Torn, William Forsythe, and Clancy Brown. The film was directed by Walter Hill, with a screenplay by Harry Kleiner and Deric Washburn (the latter collaborated with Michael Cimino on Silent Running and The Deer Hunter) from a story by John Milius and Fred Rexer. Extreme Prejudice is a homage of sorts to The Wild Bunch, a western directed by Sam Peckinpah, with whom Hill worked on The Getaway. Both films end with a massive gunfight in a Mexican border town. The title originates from "terminate with extreme prejudice", a phrase popularized by Apocalypse Now, also written by Milius. The lead character of Jack Benteen (Nolte) was loosely based on Joaquin Jackson. Nolte spent three weeks in Texas with Jackson learning the day-to-day activities of a Ranger. Nolte took what he learned and incorporated it into his character's the mannerisms and dress.