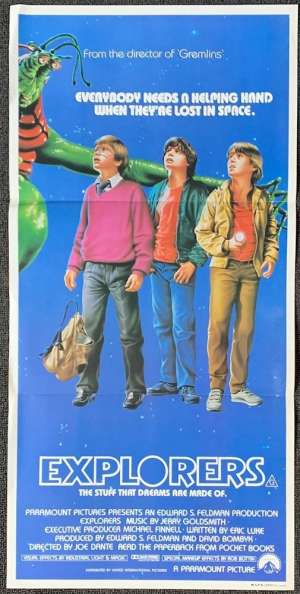 Daybill Poster.Explorers is a 1985 American science fantasy film written by Eric Luke and directed by Joe Dante (Gremlins). The film was originally to be directed by Wolfgang Petersen having initially impressed Paramount executives with his family-targeted The NeverEnding Story. The film stars Ethan Hawke and River Phoenix, both in their film debuts, and Jason Presson as teenage boys who build a spacecraft to explore outer space. The special effects were produced by Industrial Light & Magic (George Lucas), with make-up effects by Rob Bottin. Over time, Explorers has gained a cult following among fans of Dante's work, as well as science fiction fans.