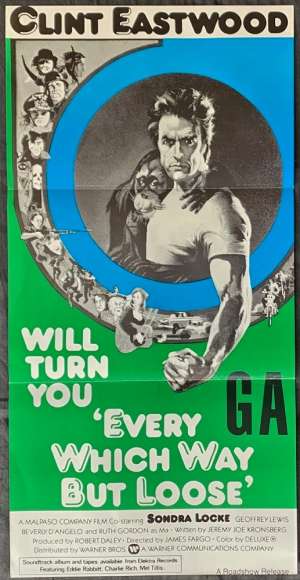 Daybill Poster with artwork by Bob Peak.Note the different colour combination of credits throughout the poster when compared to other releases.

Every Which Way but Loose was released by Warner Brothers in 1978, produced by Robert Daley and directed by James Fargo. Starring Clint Eastwood in an uncharacteristic and offbeat comedy role, as Philo Beddoe, after his string of spaghetti western and Dirty Harry roles, somewhat startled the film industry and he was reportedly advised against making it. However, the film went on to become an enormous success and became, along with its 1980 sequel Any Which Way You Can, two of the highest grossing Eastwood films.