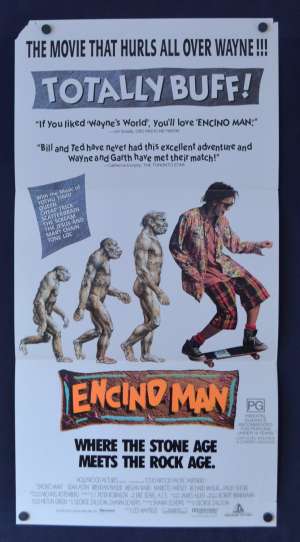 Daybill Poster. Encino Man (known as California Man in Europe and New Zealand) is a 1992 American comedy film directed by Les Mayfield and starring Brendan Fraser, Sean Astin and Pauley Shore. The plot revolves around two geeky teenagers from Encino, Los Angeles, California, played by Astin and Shore, who discover a caveman in Morgan's backyard frozen in a block of ice. The caveman, played by Fraser, has to learn to live in the 20th century. Along the way, he teaches them about life. The film was a box office success. The film took in $9,866,120 in its opening weekend coming 4th at the box office. The film went on to earn a total of $40,693,477 at the North American box office. The film was released in the United Kingdom on September 25, 1992, titled California Man, and opened on #5.