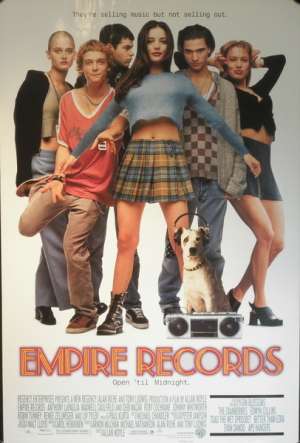 Original Australian One sheet movie poster.Empire Records is a 1995 American coming-of-age film that follows a group of record store employees over the course of one exceptional day. The employees try to stop the store from being sold to a large chain, and learn about each other along the way. The film was directed by Allan Moyle and stars Anthony LaPaglia Robin Tunney, Rory Cochrane, Renée Zellweger, Ethan Embry, Johnny Whitworth and Liv Tyler. Gin Blossoms frontman Robin Wilson would say of "Empire Records "it's a classic film that only a handful of people really saw, but it definitely made an impact on that generation. It now enjoys a cult following due to the soundtrack within the film.