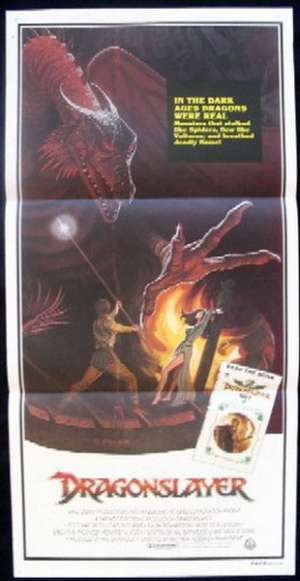 Original Australian Daybill Movie Poster - Dragonslayer with artwork by Paul Wenzel.Dragonslayer is a 1981 American fantasy film directed by Matthew Robbins. It stars Peter MacNicol, Ralph Richardson, John Hallam and Caitlin Clarke. The story, set in a fictional medieval kingdom, follows a young wizard who experiences danger and opposition as he attempts to defeat a dragon. The film was nominated for the Academy Award for Original Music Score and also was nominated for a Hugo Award for Best Dramatic Presentation. Author George R. R. Martin (Game Of Thrones) once ranked the film the fifth best fantasy movie of all time, and called Vermithrax "the best dragon ever put on film", and the one with "the coolest dragon name as well".