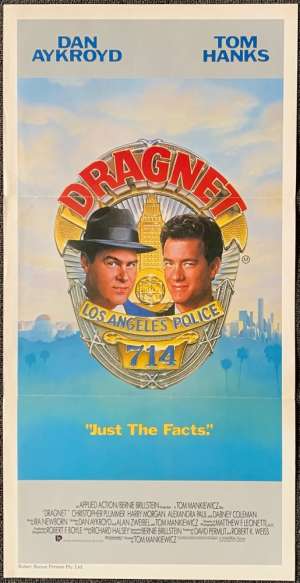 Daybill Poster.Dragnet is a 1987 American buddy cop comedy film, directed and co-written by Tom Mankiewicz (best known for his work on Superman and the James Bond series) in his directorial debut. Starring Dan Aykroyd and Tom Hanks (originally Jim Belushi was to play Tom Hank’s role but he became unavailable), the film is based on the television crime drama of the same name. The screenplay, both a parody of and homage to the long-running television series, was written by Aykroyd, Mankiewicz and Alan Zweibel. The original music score is by Ira Newborn. Aykroyd plays Joe Friday (nephew of the original series star) while Hanks plays Pep Streebek, his new partner. Harry Morgan reprises his role from the television series as Bill Gannon, now a captain and Friday and Streebek's boss. Dragnet performed well at the box office, grossing a total of $66.7 million worldwide and receiving favourable reviews along the way.