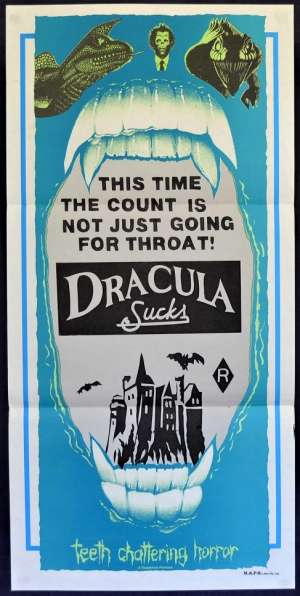 Daybill Poster.Dracula Sucks (also released as "Lust at First Bite" later), the 1978 Phillip Marshak vampire horror sexploitation comedy starred Jamie Gillis (in the title role as Dracula), Annette Haven, John Holmes, Serena, John Leslie, and Richard Bulik (as Renfield). Originally released in late 1978 as a 108 minute "hardcore" adult movie under the title of ‘Dracula Sucks’, before being edited down to 82 minutes and released as ‘Lust at First Bite’. This film has gone to be a cult film amongst some collectors.