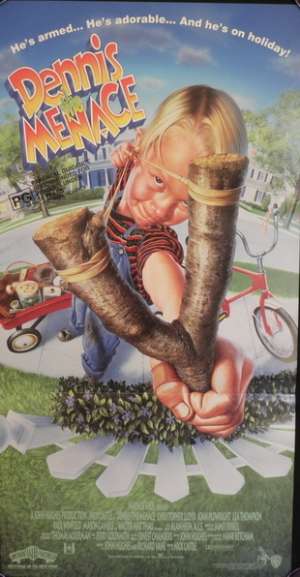 Original Australian Daybill movie poster. Dennis the Menace (released in the United Kingdom as Dennis to avoid confusion with an identically named character) is a 1993 live-action American family film based on the Hank Ketcham comic strip of the same name. Directed by Nick Castle, written and produced by John Hughes, and distributed by Warner Bros. the film was released under the Family Entertainment banner. It concerns the misadventures of a mischievous child (Mason Gamble) with a cowlick and a grin who wreaks havoc on his next door neighbour, Mr. Wilson (Walter Matthau) who usually hangs out with his friends, Joey (Kellen Hathaway) and Margaret (Amy Sakasitz), and is followed everywhere by his dog, Ruff. Jeannie Russell was the only member of the original television show's cast to appear in the movie. Also starring Joan Plowright, Christopher Lloyd, Robert Stanton and Lea Thompson.