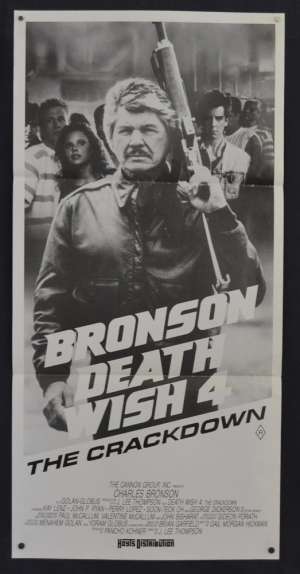 Death Wish 4: The Crackdown is an American 1987 action crime film, and the fourth instalment in the Death Wish film series. The film was directed by J. Lee Thompson, and features Charles Bronson, who reprises his leading role as Paul Kersey. In the film, Kersey is once again forced to become a vigilante after his girlfriend's daughter dies of a drug overdose. Michael Winner, who directed the first three films in the series, was replaced by J. Lee Thompson. Death Wish 4: The Crackdown had a substantially lower budget and a more limited release than its predecessors. The film marks the seventh collaboration between Bronson and director J. Lee Thompson (following 1976's St. Ives, 1977's The White Buffalo, 1980s Caboblanco, 1983's 10 to Midnight, 1984's The Evil That Men Do, and 1986's Murphy's Law).