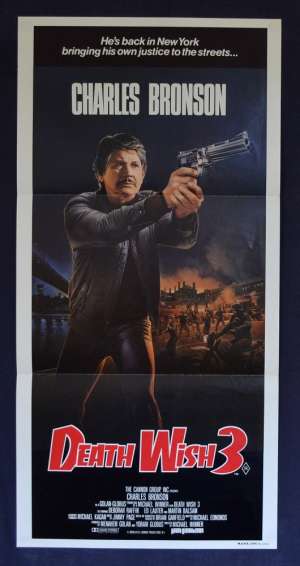 Poster art by Stan Watts. Death Wish 3 is a 1985 American action film starring Charles Bronson as vigilante killer Paul Kersey and is the third film in the Death Wish film series. It was written by Don Jakoby (under the pseudonym Michael Edmonds). This is the last Death Wish film to be directed by Michael Winner, and the last collaboration between Winner and Charles Bronson. In more recent years, the film gathered a cult following due to its over-the-top nature, including lengthy action scenes (particularly the shoot 'em up finale), stylized violence, cheesy dialogue, and memorable one-liners. Its unreality has, in some film cult circles, been seen as "so bad it's hilariously good".