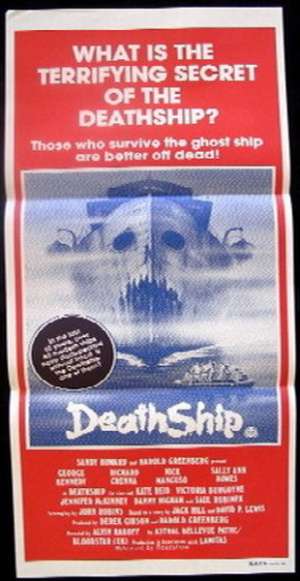 Original Daybill movie poster.Death Ship is a 1980 British-Canadian horror film directed by Alvin Rakoff and written by Jack Hill.The cast includes Academy Award winner George Kennedy, Richard Crenna, Sally Ann Howes, and Black Christmas actor Nick Mancuso.The storyline goes as follows - Survivors of a tragic shipping collision are rescued by a mysterious black ship which appears out of the fog. Little do they realise that the ship is actually a Nazi torture ship which has sailed the seas for years, luring unsuspecting sailors aboard and killing them off one by one.