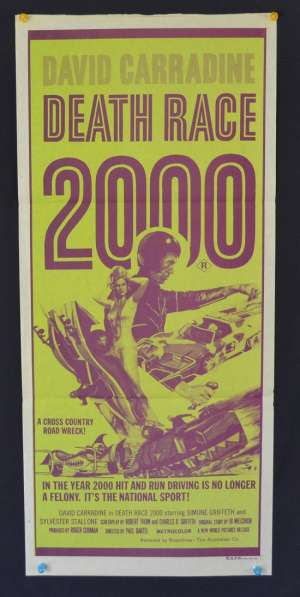 Daybill Poster.Death Race 2000 is a 1975 American science fiction sports film produced by Roger Corman, directed by Paul Bartel, and starring David Carradine, Simone Griffeth and Sylvester Stallone. Roger Corman wanted to make a futuristic action sports film to take advantage of the advance publicity of Rollerball (1975). Corman wanted Peter Fonda to play the lead, but he was unavailable, so David Carradine was cast instead. Carradine was paid 10% of the film's gross — he and Ron Howard were the only stars of Roger Corman Productions to ever get a percentage of the gross. The film takes place in a dystopian American society in the year 2000, where the murderous Transcontinental Road Race has become a form of national entertainment. The screenplay is based on the short story "The Racer" by Ib Melchior. Production was not easy on the film set. Carridine had to finish his 'Kung Fu' series before starting and when production started bad weather set in. However like most Corman films over time, the film has long been regarded as a cult hit. It was often viewed as superior to Rollerball, a much more expensive major studio drama released later in the same year; another dystopian science-fiction sports film similarly focusing on the use of dangerous sports as an "opiate" for the masses.