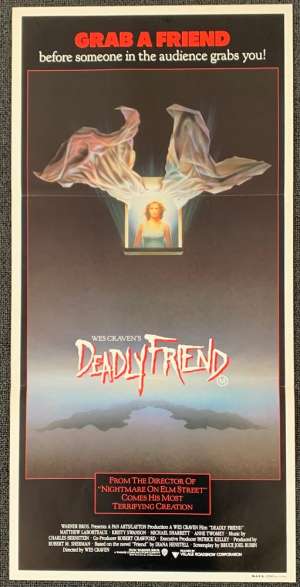 Daybill Poster.Deadly Friend is a 1986 American science fiction horror film directed by Wes Craven, and starring Matthew Laborteaux, Kristy Swanson, Michael Sharrett, Anne Twomey, Richard Marcus, and Anne Ramsey. Its plot follows a teenage computer prodigy who implants a robot's hardrive into the brain of his teenage neighbour after she is pronounced brain dead; the experiment proves successful, but she swiftly begins a killing spree in their neighbourhood. It is based on the 1985 novel Friend by Diana Henstell, which was adapted for the screen by Bruce Joel Rubin. Originally, the film was a sci-fi thriller without any graphic scenes, with a bigger focus on plot and character development and a dark love story centering around the two main characters, which were not typical aspects of Craven's previous films. After Craven's original cut was shown to a test audience by Warner Bros., the audience criticized the lack of graphic, bloody violence and gore that Craven's other films included. Warner Bros. executive vice president Mark Canton and the film's producers then demanded script re-writes and re-shoots, which included filming gorier death scenes and nightmare sequences, similar to the ones from Craven's previous film, A Nightmare on Elm Street.